For their Extended Project Qualification, Year 12 pupils Anna and Langa decided they wanted to host an event - Cobham Hall's first Model United Nations Conference. Although there have been full school conferences previous, this was to be the first with delegations invited from local schools.  They did a fantastic job pulling it together. A General Assembly saw all delegations discuss the growing tension surrounding the US-Mexican Border and President Trumps's notion of building a wall. Here, the day's press team round up the Committee discussions. 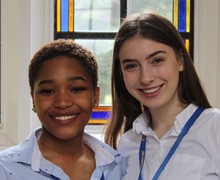 A Note From Our Secretary Generals...Langa & Anna:

“It’s been great to see everyone getting involved, even those who have never participated in MUN before. There have been some great solutions proposed to some of the world’s biggest issues in modern society and I hope you will all continue to take part in MUN. Although planning this as part our EPQ was difficult, it has been so rewarding to see the enthusiasm of delegates and for that we are grateful.”

COMMOTION IN THE COMMITTEES

The day kicked off with the delegates attending their relevant committees, discussing some of the most topical issues in the world today, showcasing the efficiency of MUN in bringing awareness to problems that urgently need addressing.

In the Human Rights Committee, the point of discussion involved that of a universal age of consent. A resolution was proposed by DPRK delegate Maci, who had this to say on the matter, “The introduction of a universal age of consent would increase conflict and uprisings within countries who have deeply rooted cultures and religions. This would strongly go against their ideals and, where in the current political climate, it would contribute an added pressure that member states do not wish to see.”

This resolution was very controversial among the floor of debate and was particularly objected by the USA and Poland. Poland suggested that the use of education should be relevant in tackling such matters of unwanted pregnancies and rape which both are commonly associated with countries who have low ages of consent. Whilst the delegate of Indonesia didn’t necessarily agree with idea of education being the way to go, they did propose that by creating a minimum age of consent universally of 13/14 they could stop really low ages of consent, such as 11 in Nigeria, but allow other countries who have higher ages of consent, for example 16 in the UK, to interpret it as they please and do not necessarily have to lower the age to 13/14.

Meanwhile in the Educational and Political Committee, the question of debate was about making a compulsory curriculum of teaching students about LGBTQ. However, with many conservative countries and some being very religious, opinions varied and some not so positive.  DPRK exclaimed "We’re able to rule our country how we want to, so we will do so but not supporting this." The country also said that LGBTQ thoughts “pollute young people’s minds”. However, a country that is for this resolution is South America, being one of the first countries to legalise same sex marriage, they believe that in order to leave their imperial past and move into a prosperous western future, making everyone equal is key and this is aided by learning about the different views of LGBTQ.

The Environmental Committee discussed the question of sustainable consumption of water and electricity. Different views arose, many against this, one being Kuwait. Kuwait disputed against this as they are a main provider of oil to the world.  South Africa was another country to do so as much of their profit is from coal mining and although becoming more sustainable will benefit the world, their country wouldn’t be part of this beneficial change as many of their inhabitants’ income relies on coal mining and they would have to reconstruct their economy if this change took place.

Written by Cobham Hall Pupil
Back to News ListPreviousNext