Cobham Hall Through the Ages

Cobham Hall has a long history, dating right back to Roman times.  For those interested in learning more, a souvenir guide book is available; details can be found at the bottom of the page.

300:  A Roman farming family live in a substantial 8 room Roman farmhouse with underfloor heating. The villa, sited in the parkland, was discovered in 1959-1960

1208: Henry de Cobham, later to become the first Baron Cobham, lives in the manor house on the site of what was to become Cobham Hall.

1613: King James I grants the Cobham Estates to his cousin Ludovick Stuart, 2nd Duke of Lenox. The Estates had been confiscated from the Brooke family following their involvement in the plot to put Arabella Stuart on the throne.

1625: Charles I and his bride Henrietta Maria spend their honeymoon night at Cobham Hall.

1725: John Bligh is created the first Earl of Darnley

1783: The Darnley Mausoleum is completed. The unique building was built for the 3rd Earl by his son and over two centuries later, featured in the BBC programme “Restoration”.

1819: The Duke and Duchess of Kent stay overnight at Cobham Hall on their way to Kensington Palace. Their daughter, the future Queen Victoria, was born just two weeks later.

1870: Charles Dickens dies. The Swiss chalet in which he wrote was displayed at the Great Exhibition before being moved to the grounds of Cobham Hall as a gift to his great friend, the 6th Earl of Darnley.

1882: The English cricket team leave for Australia to regain the then mythical Ashes. The team is captained by Ivo Bligh, later to become the 8th Earl of Darnley.

1914 – 1918: Cobham Hall becomes a military hospital for the British Army, then for officers of the Australian army. Ivo’s Australian wife, Florence, acted as matron and was later created a Dame of the British Empire for her services.

1927: According to the Marylebone Cricket Club’s “Origin of the Ashes”, on Ivo Bligh’s death in 1927, “his widow presented the urn to the Marylebone club for safekeeping and it is in the M.C.C. Museum that the ashes urn remains”.

1939 – 1945: Cobham Hall is first a home for evacuees, then for the RAF officers from the Battle of Britain fighter squadron based at the aerodrome in nearby Gravesend.

1959: The Hall is purchased by the Ministry of Works, and a programme of repairs is started.

1962: A new school for girls opens its doors to 50 students. The school is the project of Mrs Bee Mansell, who wanted girls to enjoy the same public school education as provided to boys. The Headmistress is Miss Brenda Hancock.

1966: The Tutorial Building is opened.

1979: Sir Robert Mayer opens the Music Wing. Sir Robert was a major supporter of music and young musicians and Cobham Hall was delighted to welcome him to the school in his 100th year.

July 1989: The Activities Centre is opened by Virginia Wade.

1990: Susan Hampshire opens the centre for learning support which bears her name.

2012: Celebratory book commissioned to mark the 50th Anniversary of Cobham Hall as a School.  Elders are invited to contribute to the book.

This Souvenir Book, detailing the history of the Building 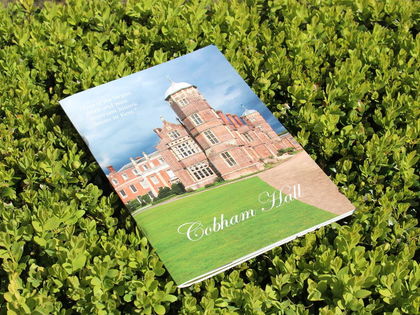 and the Grounds, is available to purchase for £5, plus postage and packing.  To order a copy, please email enquiries@cobhamhall.com with your full name, address and contact telephone number.