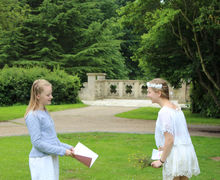 In Years 7, 8 and 9, English is primarily taught through reading a wide range of literary and non-literary texts as well as encouraging students to develop their own individual writing.  Novels studied include ‘Private Peaceful’ by Michael Morpurgo and ‘The Graveyard Book’ by Neil Gaiman as well as the collection of short stories ‘A Writer’s Cauldron’. A range of poetry is studied, including pre-twentieth century works.  A love of Shakespeare is also encouraged, with students reading scenes, and eventually, whole plays.  The use of role-play is used to enhance understanding of scenes.

The English Department runs a Creative Writing Club, with submissions to various competitions supported and encouraged, and there is an annual Poetry Competition in celebration of National Poetry Day. Students also regularly take part in the Southern Schools’ Book Award. 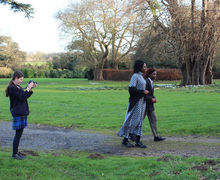 In Years 10 and 11, most students follow the AQA syllabus and take both English Language and English Literature GCSEs.  The Language course includes close analysis of fiction and non-fiction texts, and the students' own creative and persuasive writing. The Literature course is comprised of Shakespeare, a 19th Century novel, Modern Prose or Drama, and Poetry: both an anthology of works and unseen. All assessment is by final examination and there is also a separate Spoken Language endorsement in which students prepare and give a speech.  As with the younger years, students are encouraged to use role-play and creative techniques to explore texts.

A Level English Literature provides students with a stimulating intellectual challenge and the opportunity to develop their subject expertise by responding creatively, critically and independently to a range of texts from different time periods and genres.

In Year 12 and 13 students follow the Edexcel syllabus. This compromises of three examination papers on: Prose, with post and pre-twentieth century texts; Poetry which focuses on a specified poet or poetic movement; and Drama which includes Shakespeare and a more modern play, as well a critical study and appreciation of the context of production. Although chosen texts will vary year on year, a typical course might include: Frankenstein and the Handmaid’s Tale, a study of Philip Larkin or the Metaphysical poets, and Shakespeare’s Othello or Taming of the Shrew, alongside The Importance of Being Ernest by Oscar Wilde.

There is also a coursework unit in which, guided and advised by their teacher, students read two texts of their own choosing and produce a comparative essay on a thematic link. Studying universal themes such as: gender; politics and power; and fate & free will; gives students a deeper and broader perception of life and, through their reading, an appreciation of history, culture and philosophy. Research and planning skills are also developed as students structure their findings into persuasive and logical essay form.

A study of English promotes: an enquiring mind; critical and insightful judgement; and the awareness of how stories and messages are constructed; preparing students to negotiate the world successfully and to self-reflect on their place within it.