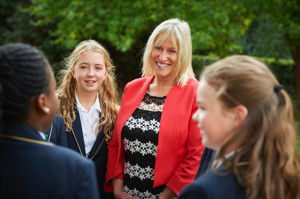 A desire to study in a city which embraced multi-culturalism led Ms Maggie Roberts to study at the University of Birmingham where she first graduated with a BA (Hons) in History. She then went on to complete a Postgraduate Certificate in Education, specialising in History and English. Always keen to learn, Ms Roberts is currently studying an MEd in Educational Leadership at the University of Buckingham.

A keen traveller, Ms Roberts has spent much of her life living and working outside of the UK. As a child she was educated in Singapore and she spent twenty years living by the shores of Lake Constance where she worked at one of Round Square’s founding schools. She enjoys meeting people and learning about their customs and cultures and has been privileged to meet some incredible people who have been an inspiration to her in her own life. Service has also been an important  part of Ms Roberts’ life and she has spent many of her vacations leading service projects in a number of countries including South Africa, Thailand and Peru.

Over the years Ms Roberts has tried many things, some, such as tap dancing were short-lived affairs, others such as her quilting and cross-stitch are always there to return to when time allows. Others such as walking and reading remain possible and enjoyable. A member of a walking club Ms Roberts tries to get out as often as she can for longer walks to enjoy the countryside. Her greatest walking challenge to date was to complete the Moonwalk to raise money for cancer and she is now proud to say she has completed a marathon - walking! It is also fair to say that Ms Roberts is also a little dog crazy and can be seen wandering around dog shows, dog fetes and any other occasion where lots of dogs can be seen!

Deputy Headmistress and Head of Boarding

Mrs Barrett joined Cobham Hall in September 1993.  She has a BSc (Hons) degree from Royal Holloway College, London, in Mathematics and Physics and a PGCE in Secondary Mathematics Education from Canterbury Christchurch. She initially trained as an Engineer and worked for Thorn EMI Instruments in Dover, Kent, eventually specialising in sales and marketing.

Following this she worked for the Department of Trade and Industry in London before taking up employment with the Royal Fellowship of Engineering as a Manufacturing Engineer.

After a career break, Mrs Barrett retrained as a teacher and has taught both Mathematics and Physics to students across all year groups. She has held various academic and pastoral roles at Cobham including that of Round Square Representative, which involved taking girls on Round Square trips to South Africa, Botswana, Australia, Europe and the USA amongst other duties.

Mrs Barrett enjoys teaching as it is always a challenge to make Mathematics engaging and to help students gain an understanding of just how often Mathematics is used in the world outside the school gates.

While she occasionally dreams of being able to tell people she walks the tightrope in her spare time, in reality Mrs Barrett enjoys the simpler pleasures in life, such as getting together with friends, going out for meals and to the cinema.  She likes reading and watching both political and crime dramas and has watched ‘The West Wing’ box set several times. The excessive consumption of the West Wing has not yet mutated into dreams of political greatness, although she may have come across a few aspiring politicians in her classroom!

Mrs Carney joined Cobham Hall in 2008. She has a degree in Physical Education and Geography from Exeter University, a course that allowed her to combine her love of sport with a preference for the outdoors, and a desire to work with children.

Originally joining Cobham Hall as a PE teacher, Mrs Carney also teaches Geography, and is Director of Studies.  She enjoys the work ethic of girls at Cobham Hall, who put their heart and soul into their sport and work hard to go above and beyond. She admires their collective determination not to let their peers down – an essential part of successful (and enjoyable) team sports.

Mrs Carney likes travelling and has Interrailed around Europe, as well as travelling around America after coaching tennis at summer camps.  She considers herself very fortunate that during her time at Cobham Hall, she’s had the opportunity to accompany school trips, including a Netball Tour to Barbados, a joint Science/Geography trip to Iceland and Skiing in Italy – albeit as the nurse on that occasion!

Mr Standen joined Cobham Hall in 2010 but has been involved in the Cobham Estate since 1997, when he took on the role of Project Director for the Cobham Ashenbank Management Scheme (CAMS).  A landscape and heritage project set up in response to the development of the High Speed Rail Link, CAMS worked to restore the historic Cobham Park and associated historic buildings.

Mr Standen was educated at The Judd School and went on to obtain a BSc (Hons) in Environmental Science. On leaving University, he moved to Essex to work on the management and development of country parks and nature reserves reaching the position of Countryside Services Manager with responsibility for over 1,500 hectares of parkland and associated facilities.

Mr Standen moved to Kent to head the CAMS project. Following a successful application for over £4 million of lottery funding, he was asked to develop and run a charity to manage a £2 million fund aimed at stimulating landscape, heritage and access projects in the area affected by the development of the High Speed Rail Link. Having established the charity, Mr Standen took the decision in 2004 to go part-time and set up his own consultancy business. As a consultant, he successfully developed funding bids for a range of landscape and heritage projects securing over £15 million over six years for projects across North Kent. He also returned to the CAMS project on a part-time basis in 2006 to manage the implementation of the restoration project and secure further project funding.

Married with two children, a son and a daughter, Mr Standen used to race 600 cc motorbikes at amateur club level and enjoys cooking.  His daughter is a Cobham Hall Elder.