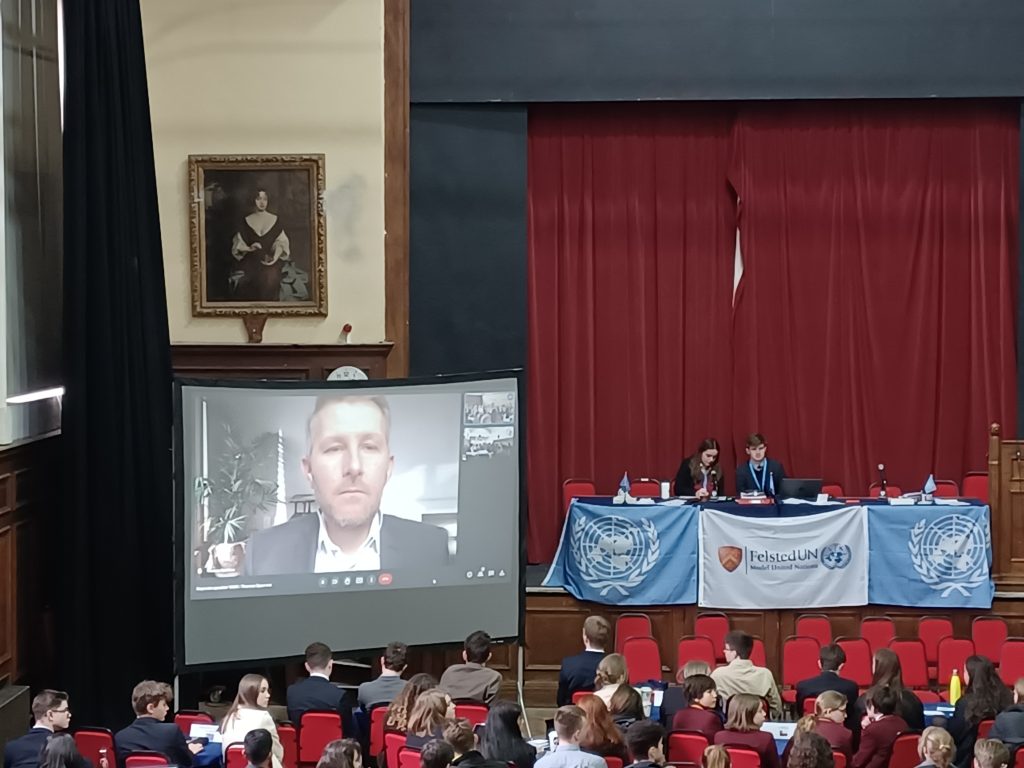 Ten delegates from Cobham Hall attended the Felsted Model United Nations (MUN) Conference representing China and South Africa. The theme of the conference was ‘Striving for Global Cooperation’ and it was particularly apt given the events that were unfolding in Europe as we debated together.

We heard from speakers Ash Perrin (The Flying Seagull Project) on the work he is doing with children in refugee camps around the world and Thomas Sparrow, a journalist who helped us consider the role of the media in shaping our understanding of current affairs. Debates ranged across issues including vaccination, cyber-crime, education, the trade in ivory and the treatment of Uighur muslims in China.

Jess (Year 11) attended a special historical committee set in 1979 so she was discussing the Soviet invasion of Afghanistan and the Iranian Revolution (and wearing her grooviest outfit).

All the students who attended got involved in the debates, speaking regularly, and suggesting possible solutions to the problems under discussion. At the end of the conference all delegates came together for a debate based on an invented crisis which featured the delegation of China at its very heart. The two Cobham Hall delegations found themselves on opposite sides of the debate and those representing China had a lot of work to do in trying to win the support of other countries in the assembly.

After an hour of heated debate and feverish note-writing China prevailed. Three Cobham students were awarded ‘Commended Delegate’ for their contributions to the conference. Rhiannon (Year 12) proved her credentials as Cobham Hall’s Secretary General in the Security Council, Jess was commended for her participation in the Historical Security Council and Alyssa (Year 11) won her commendation in the Human Rights Committee. Miss Williams was really impressed by all the delegates, who rose to the challenges admirably and made excellent contributions to the conference.